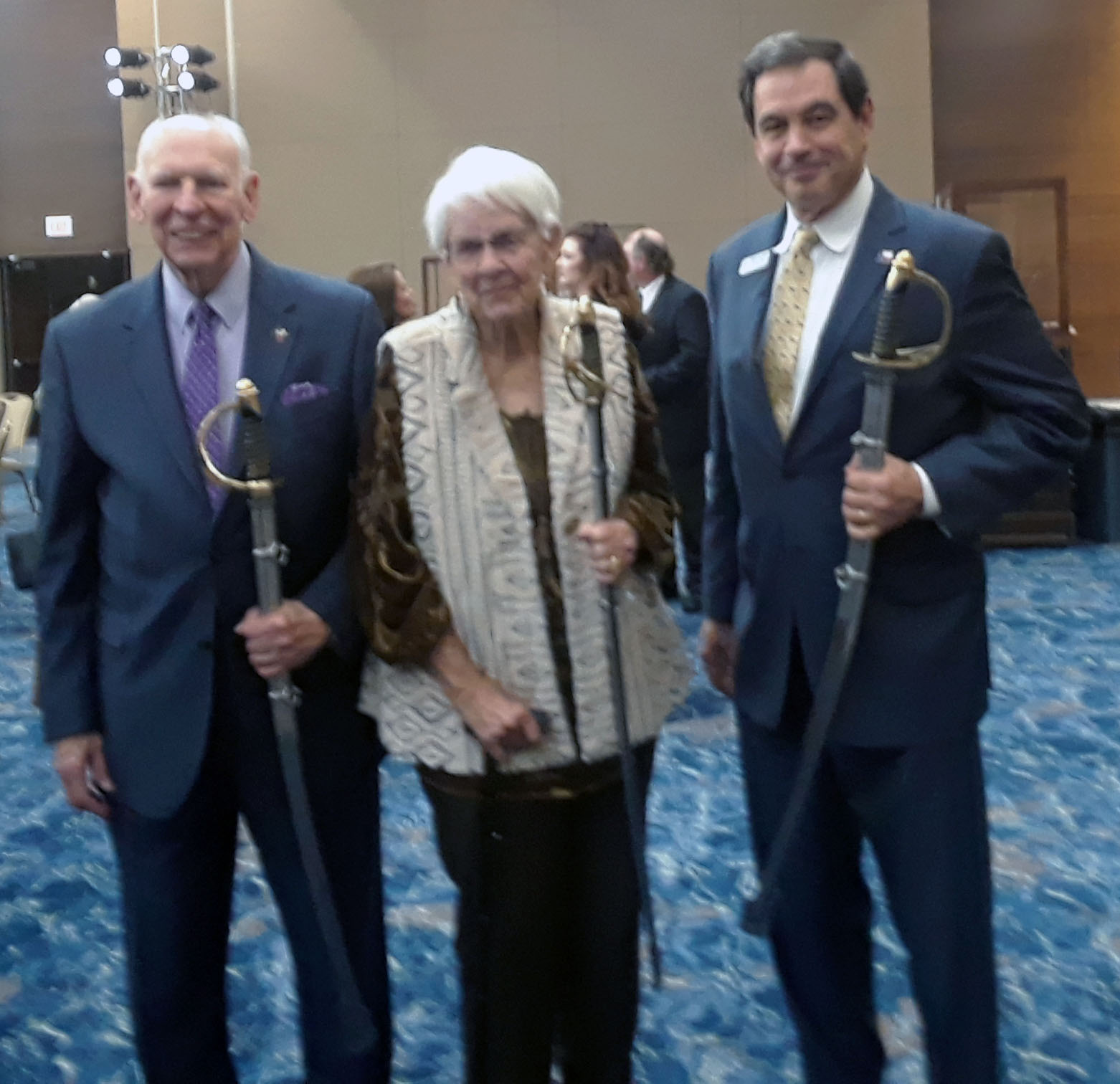 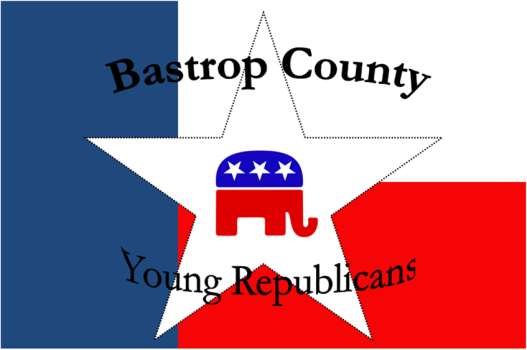 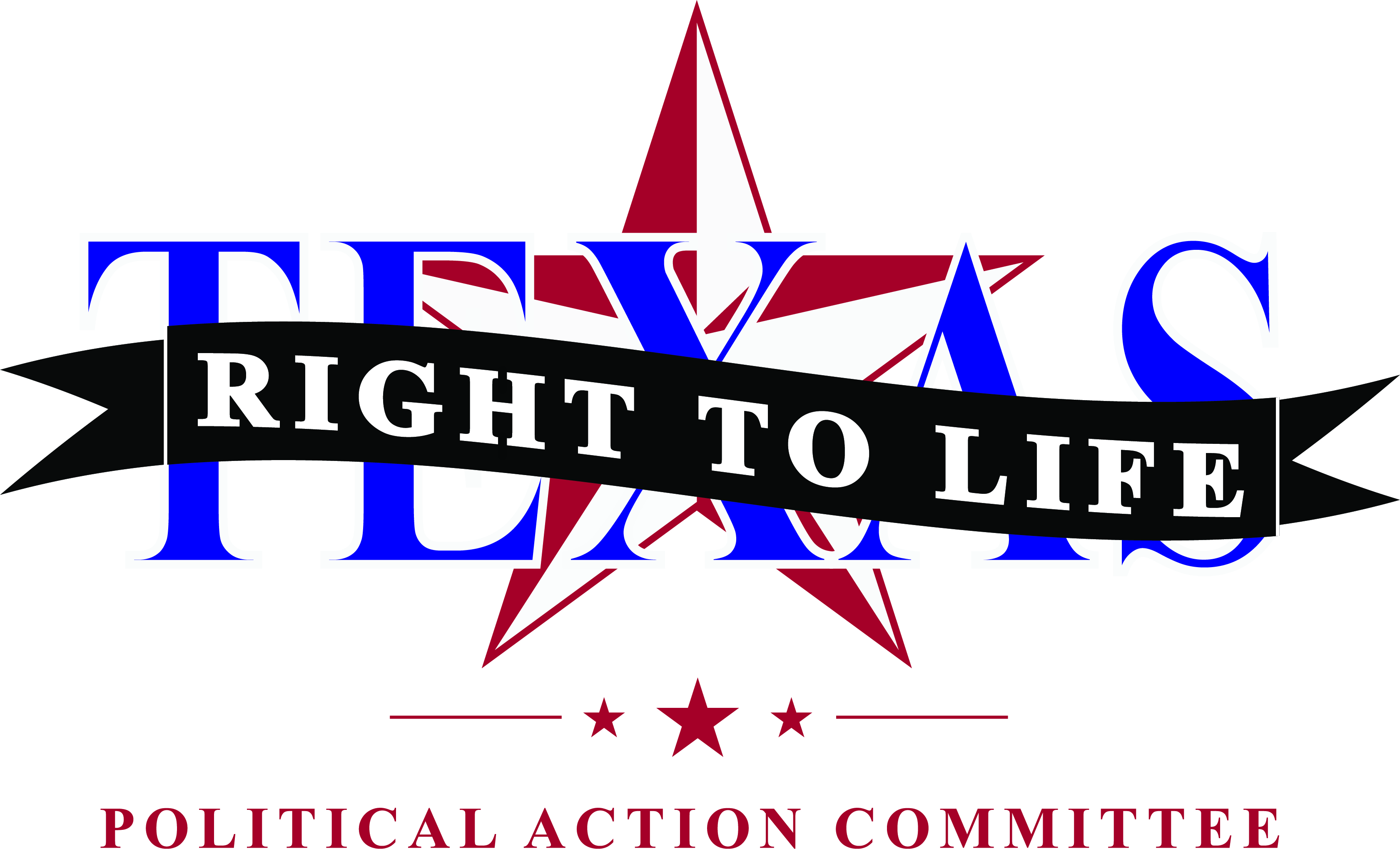 Grassroots America:  We the People 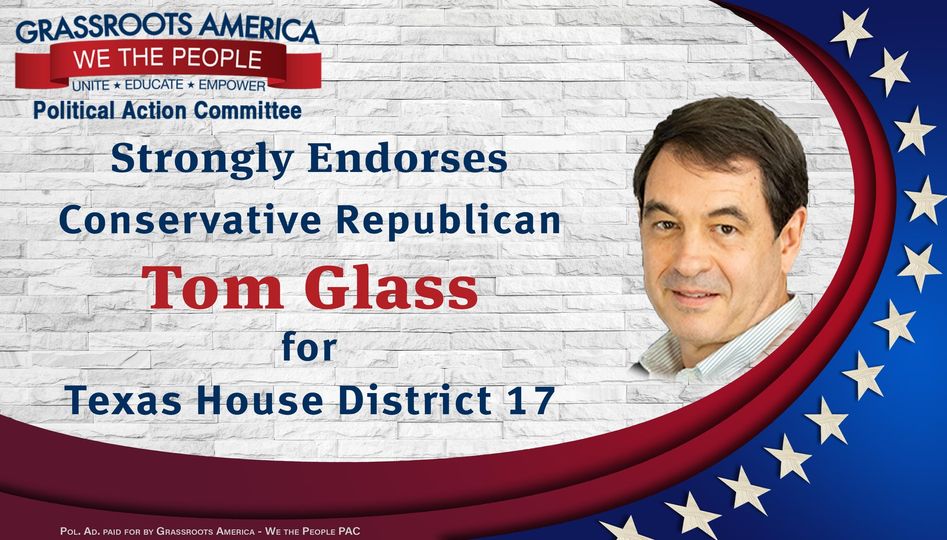 JoAnn Fleming, Executive Director: “Reminding voters why we strongly endorsed accountability hawk Tom Glass for Texas State Representative HD 17! Tom has been an invaluable asset to the conservative grassroots movement for many years – analyzing legislation, testifying in legislative hearings, and educating new activists. Texans need legislators who will not tolerate unconstitutional acts of tyranny by the state or federal government, including the judiciary. We desperately need constitutionally conservative leadership in Austin – public servants who will put our state government back into a constitution-sized box to cut regulation and spending and who will fight for the Texas we love.“Conservative Tom Glass will not bow to liberal media opinions, big business interests, political thuggery or a God-less culture. We are confident that Tom possesses the moral compass and the courage to stand and fight for state sovereignty and individual liberty by fighting against Austin corruption. Texas is at a crossroads. She needs strong, energetic, capable, principled leaders. Vote Liberty – send Tom Glass to the Texas House.” 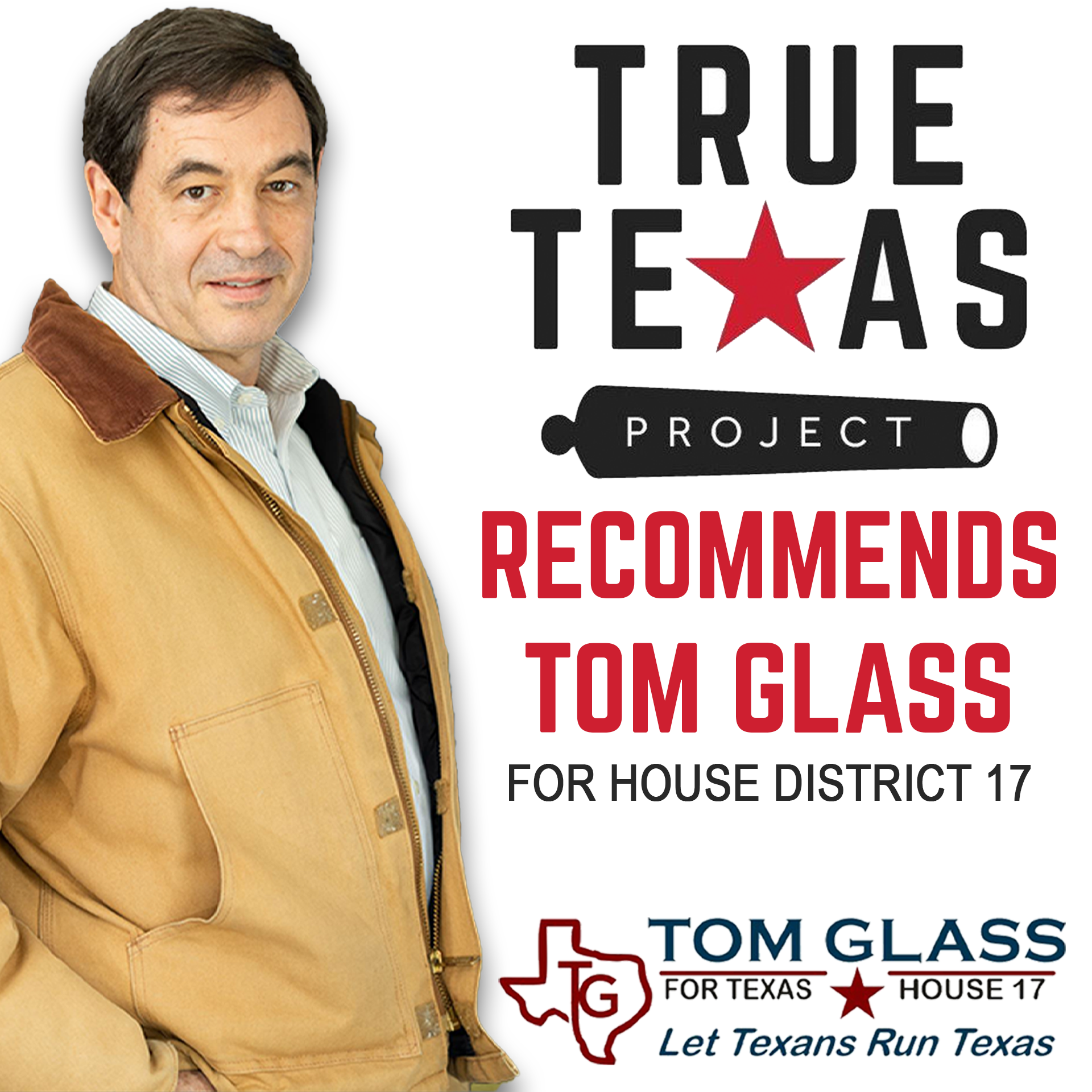 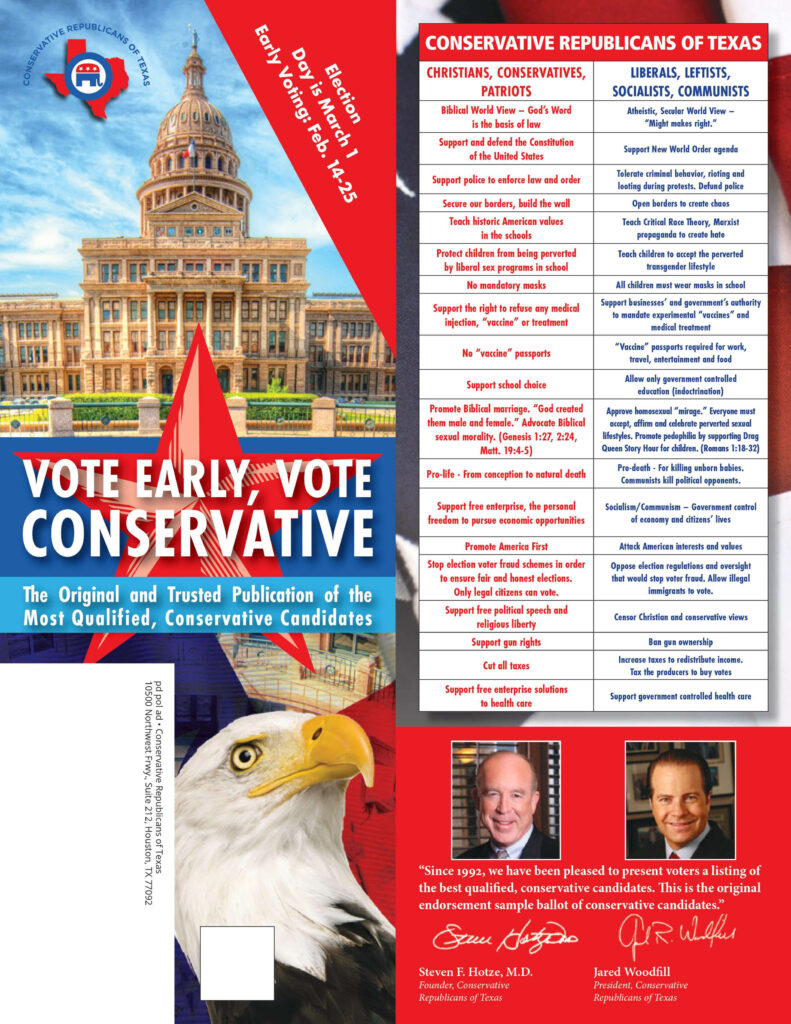 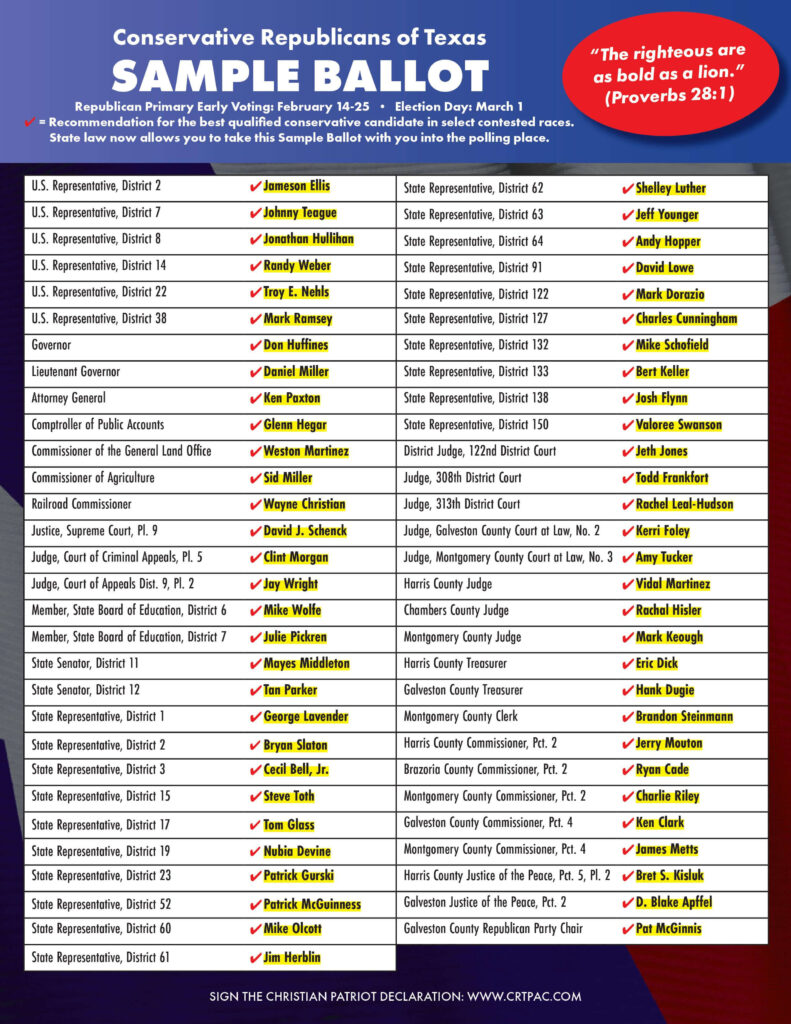 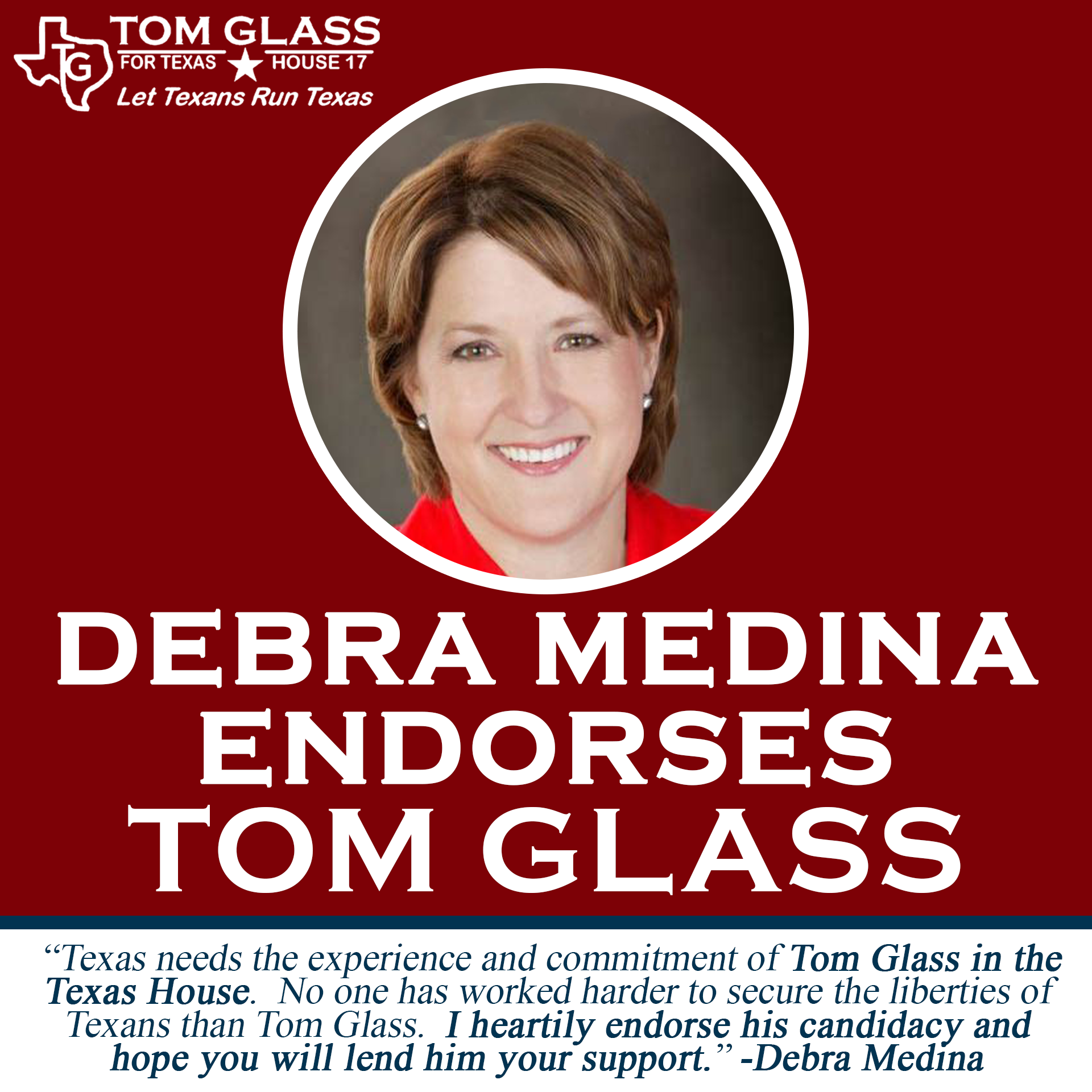 “Texas needs the experience and commitment of Tom Glass in the Texas House.  No one has worked harder to secure the liberties of Texans than Tom.  I heartily endorse his candidacy and hope you will lend him your support.”   Debra Medina 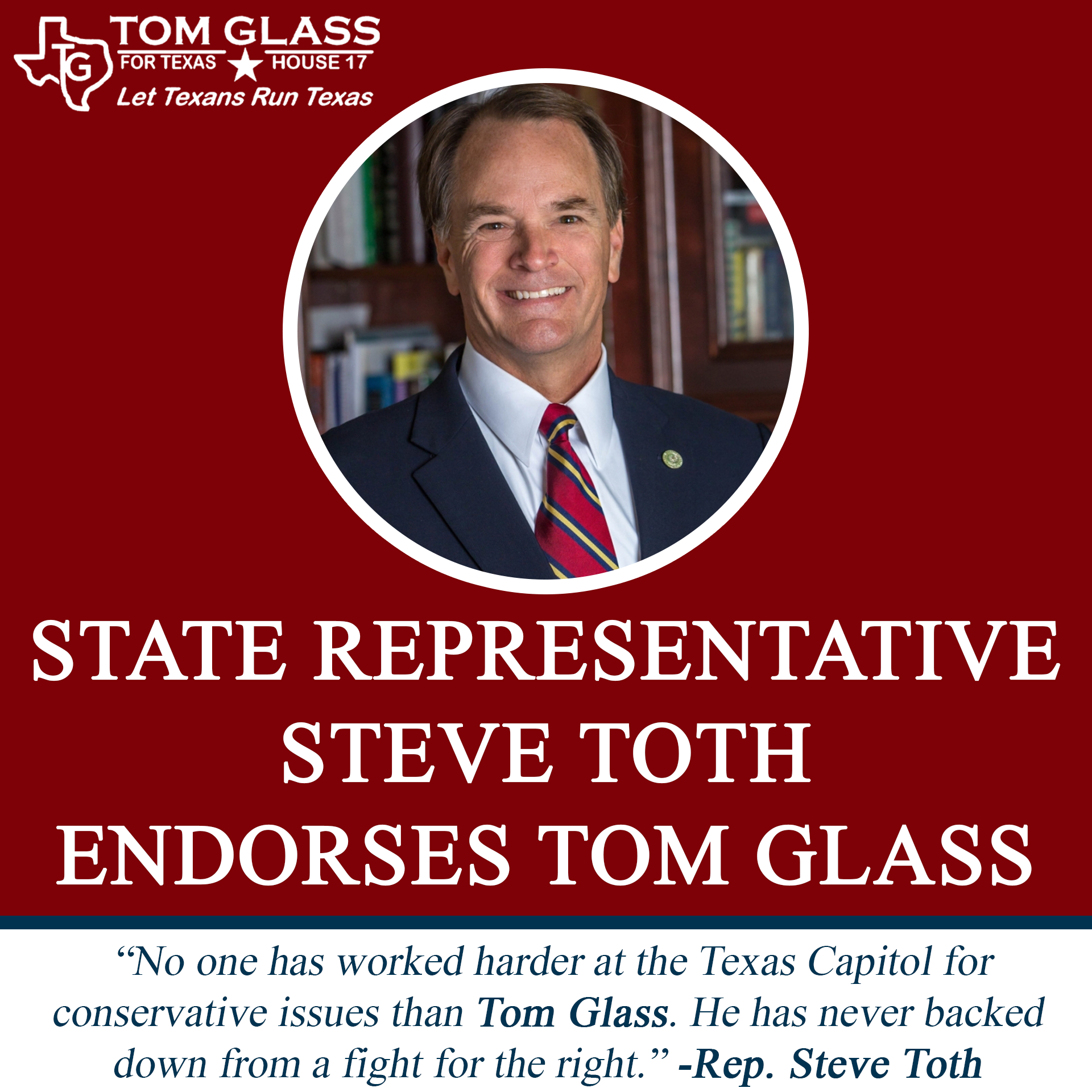 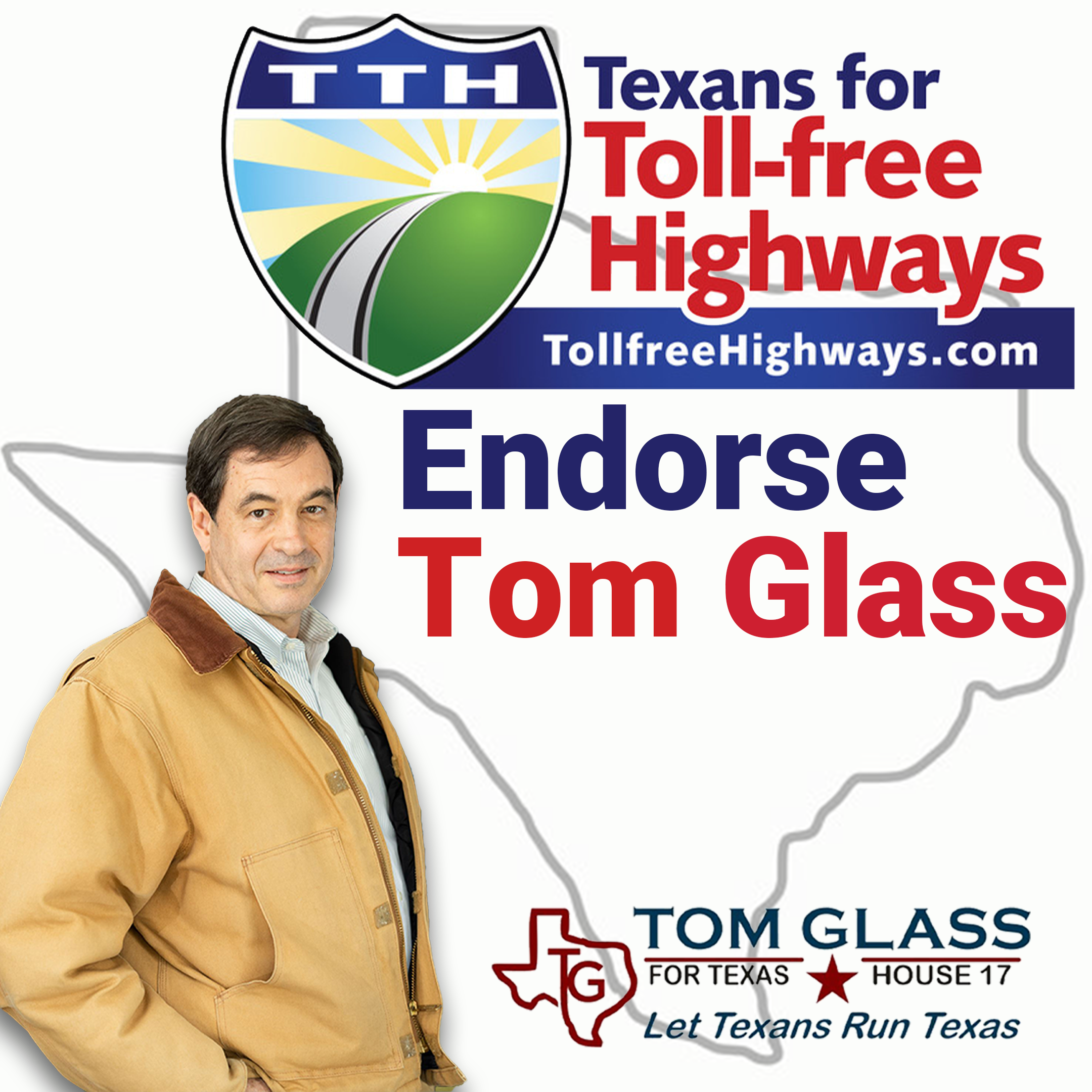 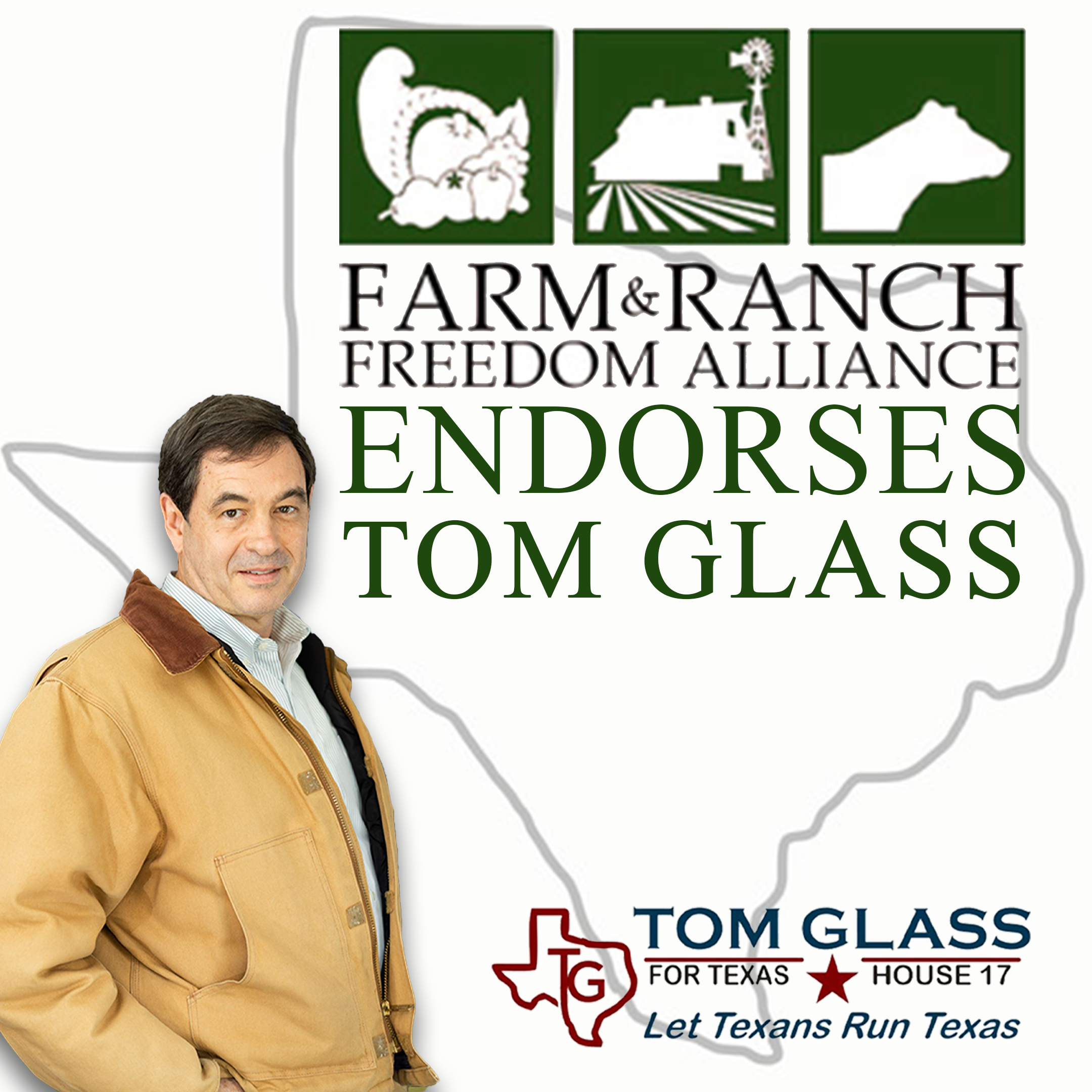 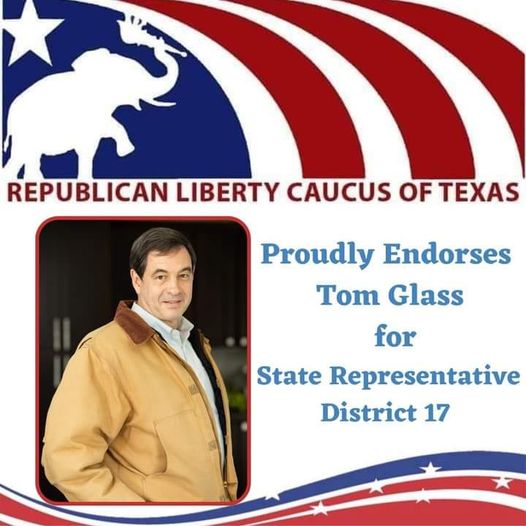 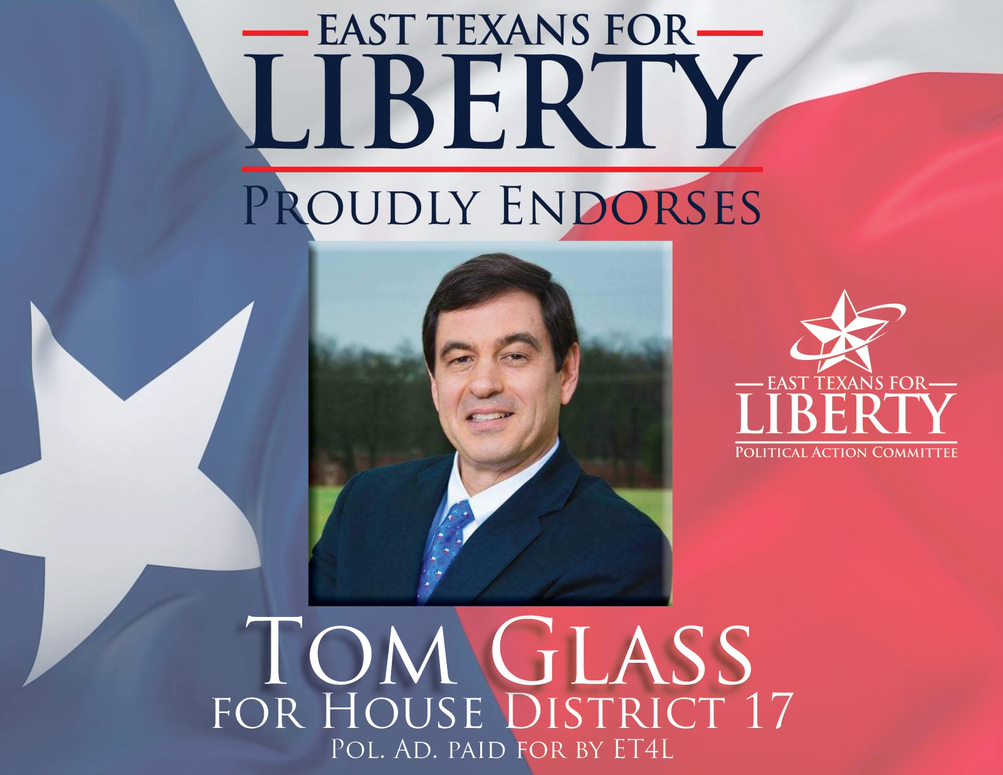 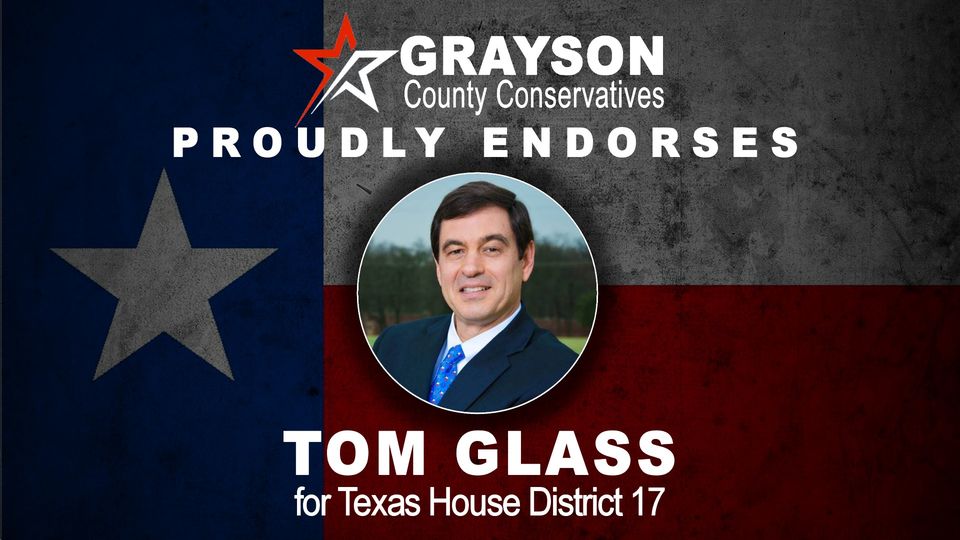 Texas Eagle Forum recommends Tom Glass in the Texas House, District 17 race.  They say about recommending, rather than endorsing, in the race:  "TEF believes these candidates are the best in their race.  We either differ on one issue or don't know them well enough to issue a full endorsement.  We hope to get to work with all of them!" 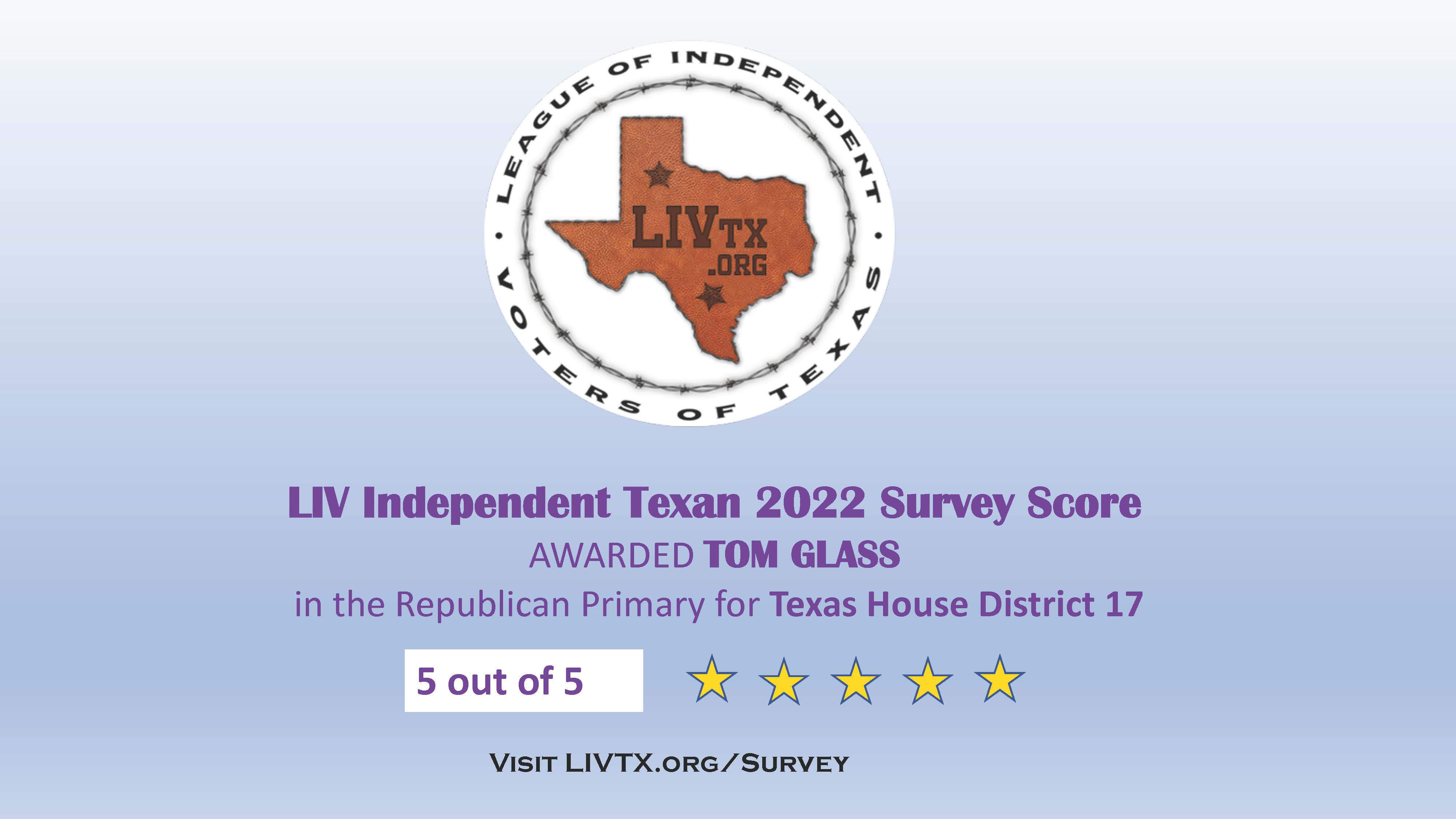 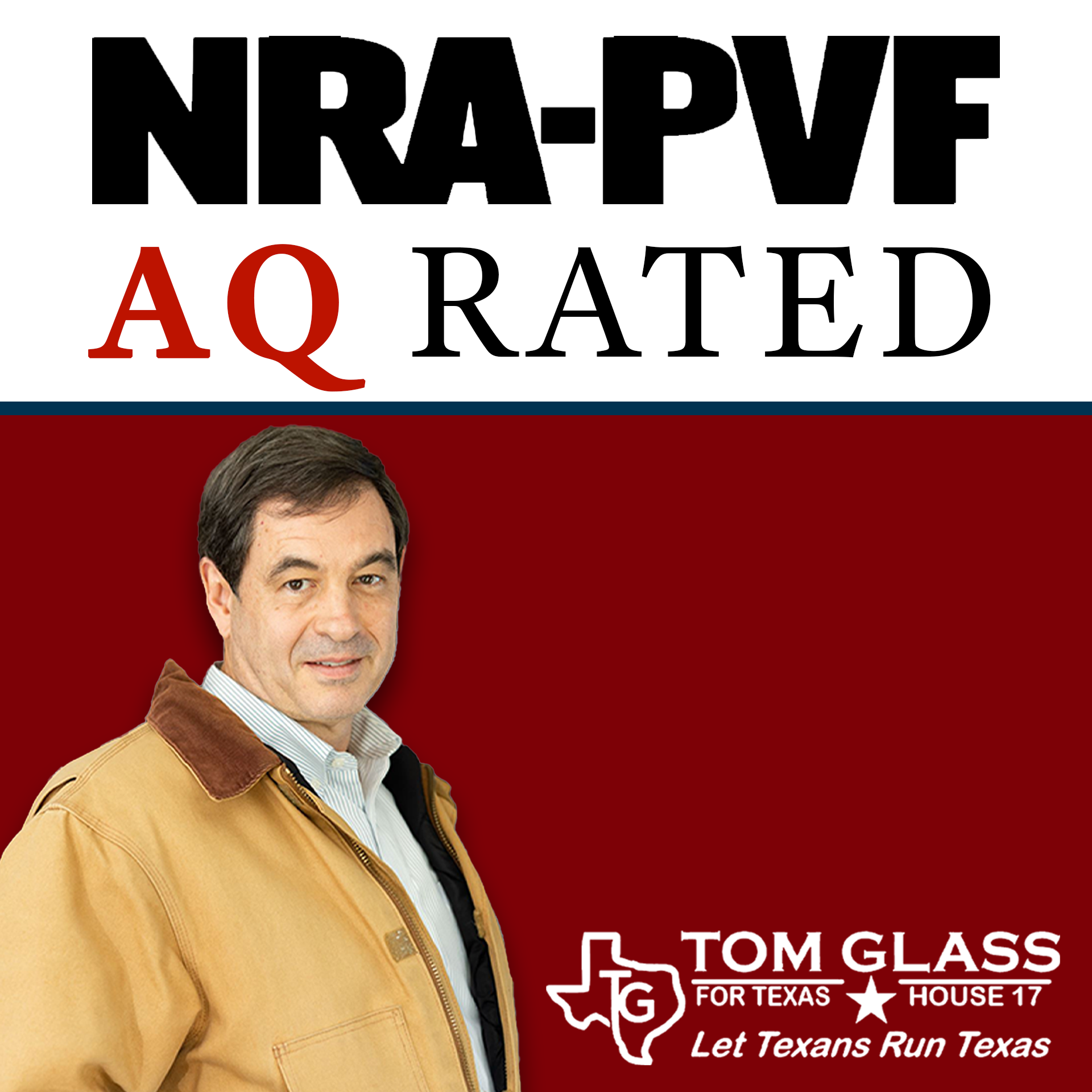 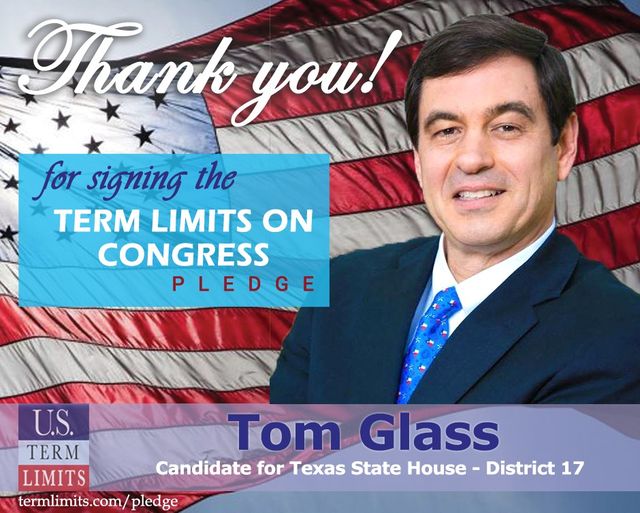 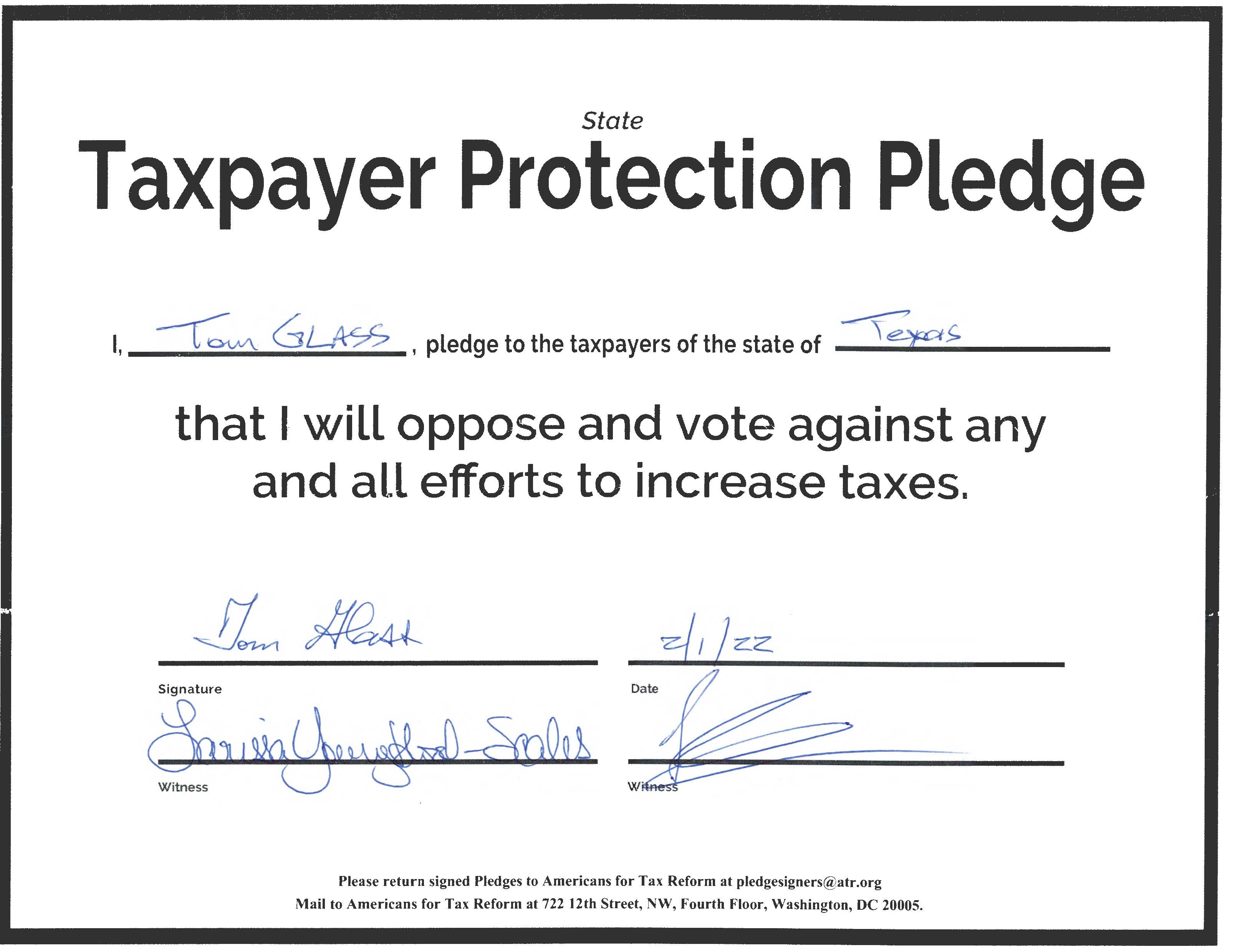 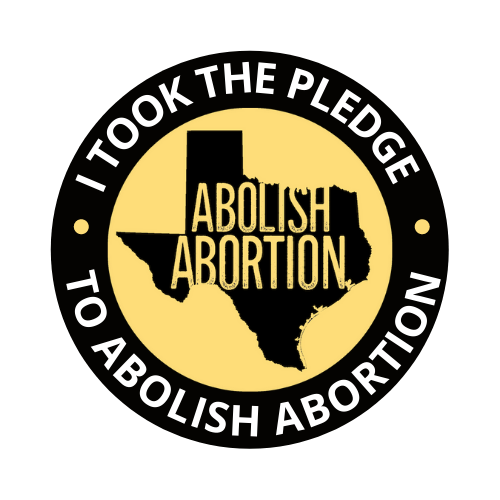 Let me say something about endorsements. I ran into a man the other evening who asked me what I thought about an endorsement by a prominent former politician of one of my opponents in the race.
He asked the question in such a way, that I asked back, "Are you asking me whether you are in the best position to judge who can best represent you? Are you saying that you don't think that others can really know what you are about and may not have your interests in mind when they make the endorsement?" He said, "Yeah. That was kind of what I was thinking."
I value endorsements because they are usually done by people who have been paying attention to their issue or state level politics in general. When those organizations vet me to see if I am the real deal, and conclude that I am, I am honored.
The real issue in all of this is how is a voter who knows what they want supposed to figure out who is best positioned to do what they tell the voters? So many politicians have said they would do one thing and then done the other when in office. Every Republican candidate says they are conservative, even when sometimes they are not. Talk, indeed, is cheap. How is the voter supposed to know who has substance, and who does not?
Patrick Henry said in his famous Give Me Liberty or Give Me Death speech, "I have but one lamp by which my feet are guided, and that is the lamp of experience. I know no way of judging of the future but by the past."
I hope as you make your decision about who to hire to be your champion in Austin that you look at my record of commitment to our shared values. I think the lamp of experience in my case shows that I will continue to fight for you in Austin the way I have already done on my own dime.
Endorsements from the right groups and right people can help in all that. But in the final analysis, you, the voter, are the boss. You are the decision maker that has to use discernment and separate the wheat from the chaff. I will pass on endorsements as I get them to help you make YOUR decision in the ultimate endorsement - yours!