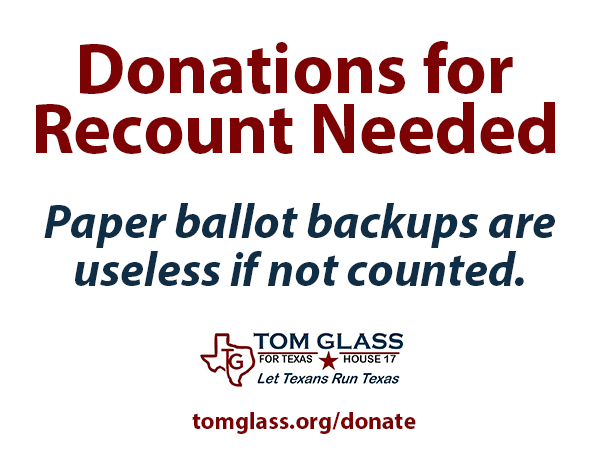 I worked for years to insure that Texas had a way to check whether the electronic voting and counting we use are compromised.  The solution I advocated was paper ballots as backup to be used in a recount.  That solution is now available, and I am glad!

Texas law allows candidates in races where the difference between a runoff or also-ran is less than 10% to pay to for a manual recount of the paper ballot backups.  When a recount is requested and paid for, the results of the paper ballot count trumps the electronic tabulation.

In my Texas House District 17 race, the unofficial, electronically tabulated results show that the difference between me making the runoff or not is 2.0% (424 votes).  So, I have decided to ask for a recount.  We estimate that this recount will cost $5,600.

I had already put more money into the race as a loan than was prudent for the long term financial health of my family.  I can't do this without your help.

Please donate to help me pay for a manual paper recount in my Texas House District 17.  Do it, today.  Deadlines are rapidly approaching and we must know what resources we have in order to proceed.

We worked very hard for a tool that would allow the people of Texas to either know that our elections are clean - or to find out that they are not.  No tool for integrity is any good if not used.  I say, "Let's find out!"

Rest assured that whatever the outcome, I will not stop pushing to save our constitutional republic, our groundwater, and our liberties!

We have our grandchildren's liberty to save, Texas to save, our Constitutions to save, and our irreplaceable groundwater to save!  I look forward to working with you on those issues and . . .

Tom Glass, 65, has the managerial, legal, educational, political, and life experiences that qualify him to be your champion in the Texas House of Representatives.

He also has created a group called Protect the Texas Grid, where he has worked to harden our electrical grid against numerous threats.  He has worked with the League of Independent Voters to safeguard groundwater from suburban development at the expense of rural districts.  And he created a Facebook group called Texas Legislative Priorities as a place where Republicans can coordinate to see that the legislative priorities of the Republican Party of Texas are implemented.

As a result of those efforts, he was recently awarded a 2021 Texas Conservative Leader Award from Texas Scorecard.

He is retired from a varied career in information technology at ExxonMobil where he primarily focused on cyber-security and security and controls.  He has also worked in the oil patch.

Having been raised to revere the Texas and American founders and their ideas, Tom was condescendingly dubbed by one of his Harvard professors as the token "Lockean," referring to Tom's adherence to the most influential philosopher to the Founders, John Locke.

Tom has never practiced law for a living, treating his late-in-life law degree as a public policy finishing school.  His wife persuaded him to go to law school by the following logic:  "Isn't politics about making law?  If you are trying to make something, shouldn't you know  about what you are trying to make?"

Tom earned his way through Texas A&M with a half academic scholarship and a half track scholarship.

Tom is married to Kathie Glass, who ran for governor in 2010 and 2014.  They have two grown children and one grandchild.  They have enjoyed their ranch in western Lee County on the border with Bastrop County for over a decade.  Here is their end of the rainbow:

Tom Glass has a strong internal moral compass, and is dedicated to doing the right thing and thinking for himself.  His heroes are the founders of Texas and America, those who have fought to defend our liberty throughout our history, and those who understand and fight for liberty, today.